What Are The Pros And Cons Of NA?

Do you have problems with substance abuse? If so, you might be wondering how to quit this lifestyle and live sober.

For this reason, you might have heard of Narcotics Anonymous or NA. Some of your family or friends may have recommended it to you. They even say it’s an effective way to regain a sober life.

But what if you’ve never heard of NA? What is it all about?

Narcotics Anonymous is one of the so-called 12-step programs for addressing drug addiction. The group sticks to these 12 principles:

In NA, you would attend regular meetings along with other recovering drug users. In these meetings, you would often share experiences with each other. It’s simple, yet very effective for many people.

Before you decide to go into NA, though, have a look first at its pros and cons.

Each meeting follows a structure

NA meetings follow a certain routine every time. This makes sure that everyone in the group is on the same page.

Oversharing is discouraged. This way, everyone will have a chance to speak their minds. In turn, each member will also learn from other members’ experiences.

Your identity stays a secret

This is where the “anonymous” part of NA comes in. Your true identity will not be revealed to anyone, even your fellow members. You would only go by your first name, and that’s as much about your identity that anyone would know.

Also, everything you share in NA meetings stays within the group.

You can learn from the experiences of others 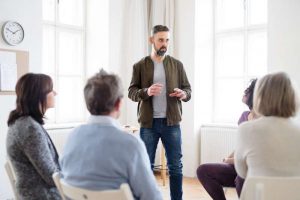 NA meetings are all about interactions with fellow members. You would not only share your problems with drugs, but your successes as well. Thus, you can learn best practices from the stories of other members. You can also find out what to avoid as you listen to the struggles of your fellow members.

Aside from the learning, you will gain a sense of belongingness with the group. That’s also important in facilitating recovery.

NA is effective in preventing relapse

Despite the simplicity of NA’s methods, very few members report going back to their old drug habits, even in the long term. With such low rates of relapse, NA is deemed a highly effective way to overcome drug addiction.

A large part of the success is being in good company. Everyone in an NA group wants to live sober, so you can get encouragement from your fellow members to stay drug-free.

NA costs you nothing to join

Rehab centers cost a lot of money, but NA does not. In fact, joining an NA group is free of charge. That’s great news if you are struggling both with drug addiction and finances.

You have to tell other members that you’re an addict

There’s one part of NA that some people object to, which is declaring themselves as “addicts” in the meetings. You might not like this either. Yes, you are suffering from an addiction, but it doesn’t mean that you need to further rub it in. Doing this may just make you feel worse about yourself, which would not help your situation at all.

NA relies too much on group dynamics

If you have a case of social anxiety, NA may not work well for your recovery. Each NA meeting involves talking with other members of the group, so if you’re not comfortable doing that, it could cause other mental health issues.

NA meetings demand a lot of your time

Most NA groups recommend you to attend at least 90 meetings in 90 days. In other words, you need to go to daily meetings for three months, with each meeting lasting from one to two hours. That’s a huge commitment of time, which you could find overwhelming.

Some members may not be serious in their recovery

Sometimes, you could encounter an NA group with problematic members. They’re not serious about recovery; instead, they’re just there to slash off a number of days in jail. It’s actually possible to substitute attending NA for prison. But most people who do this do not participate well in the meetings. Some of them may even stir trouble in the group, which can derail everyone’s recovery journey.

NA fails to deal with the biological aspects of drug addiction

The people who facilitate NA meetings are not addiction recovery professionals. Thus, they cannot give the medications or therapies you can get in rehab centers. If you need these, you won’t be able to get any of them in NA.

Other members may take it against you if you relapse

Though NA is reportedly effective in preventing relapse, sometimes it still happens. And if you become one who relapses, other members may castigate you for “straying away.” Some would even smear your image with the group, causing other members to turn against you.

While this kind of treatment is rare in NA, it still does happen. This is conduct unbecoming of a support group.